Put Some Summer In Your Winter 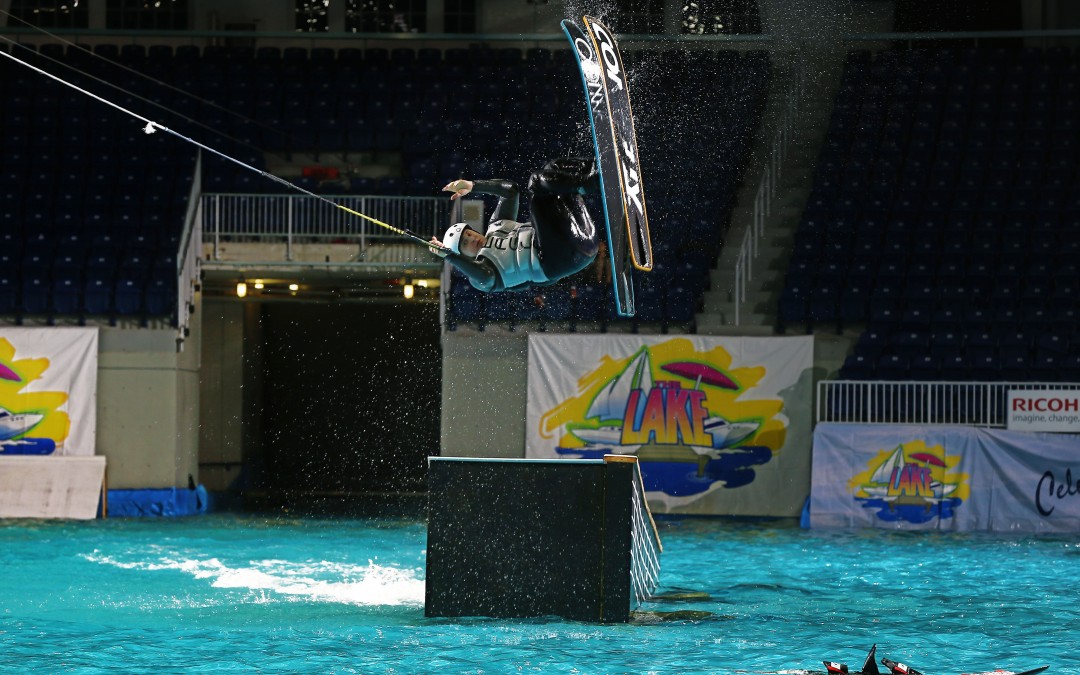 Since 1998 the Ricoh Coliseum has been transformed from the home ice of the AHL Toronto Marlies, to the largest indoor lake in the world. The area has been designed to host various events including the Royal Winter Fair and of course the Toronto International Boat Show.

The lake is created by installing a double liner in the arena across the entire surface. Over one million gallons of freezing cold water is then pumped straight from Lake Ontario into the arena. It takes about twelve hours to fill the lake at Ricoh Coliseum into a summer escape.

For the last five years Boarder Pass, a Sarnia and Hamilton based cable park, has put on a great wakeboard show using the system 2.0 cable. This cable doesn’t run in a circle, it runs back and forth. During this time Summer Water Sports has been providing free waterski and wakeboard lessons for those willing put on a dry suit and brave the ice cold lake water.

This year we were ecstatic when the boat show asked Summer Water Sports to perform our famous water ski and flyboard show, adding new entertainment for the crowds. Having grown up in Toronto and being both a hockey player and a die hard Toronto Maple Leafs fan, it was a special feeling to arrive at Ricoh Coliseum and perform in front of the home crowd.

We had some challenges in putting together a show as we had a length of about only 250 ft and a depth of only 48 inches of lake to ski on. The lake featured a double sided kicker on one side with an up flat rail and our (one hitter) ski jump on the other. This left a small gap up the middle other acts. With limited time for training and the unfamiliar cable system, our team of professionals stepped up and performed a great show.

The show started with the lights off and a short SWS demo video on the scoreboard screens. The spotlight goes on and our flyboarder, shoots up in the air spinning and flipping to the amazement of the crowd. Next, the lights come on as I come out of the zamboni tunnel to hit the jump with an opening frontflip. The clown now enters as the guest skier who won an online contest to ski in our show. The guest skier, Jerry Can, showed up in snow gear announcing that he won a free ski lesson. Jerry is given the water ski lesson from a trained Summer Water Sports employee on the dock and then went off for a wild ride on the cable. This was followed by a star swiveler, wakeboarder, and paddle skier. Jerry also performed comedy doubles and managed a jump stall for his second run. We finished the show with another jump act and a flyboard demonstration.

The big attraction of our show was flyboarding. This has never been done at the boat show before. Having the flyboard as part of the show was key because we were limited in the acts that we could perform with using the cable system.

When the arena was first transformed into a lake in 1998 Summer Water Sports performed a ski show using jet skis to pull the acts. It was a great that we got to bring the water ski show back as part of the boat show. I look forward to performing next year for the home crowd once again.